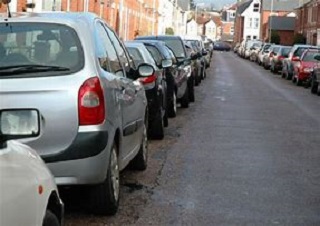 In response to concerns by residents of Bishopston and St Andrews about persistent parking problems, a hundred local residents attended a meeting on Saturday 12th May, supported by councillors from both sides of Gloucester Rd and hosted by local MP Thangam Debbonaire.

'There were strong views for and against a parking permit scheme, with a majority in favour in a straw poll, and some undecided at the start of the meeting.

To ensure constructive discussions the group divided into smaller groups and many ideas and issues to be taken into account were then discussed in a respectful manner. Some headline points were fed back including ideas that might help, e.g. a shorter period for parking restrictions; buses to be free or offer cycle racks on them; more use of double yellow lines alone, to help emergency vehicles get though; tighter restriction on students bringing cars; partial road closures (e.g. midway) to stop through traffic. The differences between streets with daytime or night time congestion were noted (as an RPS would only help during operational hours); more need for enforcement of existing rules on parking and speeding was raised. It was noted that the various schemes around the city have differing hours (as much as 9-9) and number of days (up to six days) and they have all been found popular in the recent reviews undertaken.

The many notes and points raised in groups will all now be collated and written into a report as part of a process towards seeing if there’s an area that should have some form of parking or traffic management proposals developed further. No rapid resolution of parking problems could be promised, as this is not currently a priority for the Mayor or something with any resources from the council. Currently no officer input is available for any traffic and parking work proposed locally. Even adding double yellow lines was accepted as an expensive and slow response.

The options and limitations of a residents parking scheme were debated, as well as the many issues for residents, tradespeople, carers, local businesses, and those who might be outside any future scheme. There may also be adverse impacts from the future Clean Air scheme if it has a boundary nearby.

It was agreed there are a great many perspectives that need to be taken into account, from those who walk, cycle, have mobility issues, own multiple cars, and deliver to the area and that not all ideas are compatible.
Please do continue to get in touch with your councillors if you have local concerns or ideas for how to manage parking and traffic in our congested neighbourhood. We’ll continue to press for support from the council to tackle these pressures'.