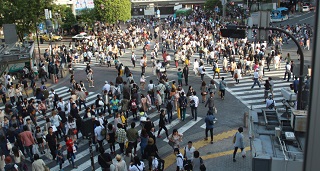 A comprehensive report from the UK charity 'Living Streets' looks at the significant positive effects of developing and investing in urban pedestrianisation. Evidence for this is demonstrated by research carried out in shopping areas across the world.

The full report called 'Pedestrian Pound' can be found at livingstreets but two small, particularly relevant excerpts are given below. References have been retained, but for the sources of these, please see the original report:

There is strong evidence that pedestrians and cyclists spend more than people arriving by motorised transport. Several international studies have compared the differences.
In a 2009 study of the Bloor Street area in Toronto, people who biked and walked there reported they spent more money there per month than those who arrived by car (Tolley, 2011).

Small-scale improvements to the pedestrian environment also offer evidence of increased spending. In June 2017, a temporary ‘parklet’ in Shoreditch, East London – which turned a space normally occupied by two cars into seating for 14 people and 8 cycle parking spaces – increased the adjacent shops takings by 20% (Hackney Council, 2017)

Wooller (2010) considered the effect of pedestrianisation in the Takapuna shopping district in Auckland, New Zealand and put a figure to the increase in spending. She found that although shoppers spent similar amounts per trip, the pedestrian shopper spent approximately $80 more per month after the improvements. This was six times the amount spent by those in cars.

In 2011, a similar study in London found that whereas car drivers spent more on a single trip, walkers and bus users spent more over a week or a month (The Means, a review for London Councils, 2012). They found that walkers spent £147 more per month than those travelling by car. Compared with 2004, spending by public transport users and walkers had risen; spending by car users and cyclists has decreased (ibid.).

In recent years, the economic impact of cycling infrastructure schemes has provided further evidence of the commercial benefits of reducing car dominance in urban centres. The European Cyclists Federation has found that if a street is transformed in a way that gives more space to cyclists and pedestrians and less to cars, the absence of customers that came by car is more than compensated for by the customers that come by foot or by bike afterward (ECF, 2015).

Lastly, motorists are not necessarily better customers than pedestrians, cyclists or public transport users. A report by the European Commission (1999) reports the findings of a study in Munster, Germany in which approximately 75% of motorists surveyed purchased two or fewer bags of goods. Many could easily have carried their shopping on foot, by bicycle or on the bus (Tolley, 2011). Indeed, several reports make the point that most shopping trips involve distances that could be walked or cycled (Commission, 1999; Sinnett et al., 2011; Tolley, 2011; Sustrans, 2006

Across Europe, a broadly positive relationship has been observed between the quality of public spaces and people’s perceptions of the attractiveness of the local area (Holcomb,1994; Barke and Harrop, 1994; Whitehead, et al., 2006) and their quality of life (Gehl, 2011). This also affects people’s propensity to shop and spend. Nevertheless, it is often assumed that our struggling high streets need more parking and should be easier to get to by car. For example, the Federation of Small Businesses has argued that businesses in towns with insufficient car parking lose customers to other destinations. They have claimed that access to parking has a ‘significant impact’ on store performance. More recently the Association of Town Centre Managers concluded that parking in towns is a complex issue and a successful strategy depends on at least twelve factors – including having an integrated transport and accessibility strategy, minimising traffic in the core and wayfinding (ATCM, 2014).

In a survey of shoppers and retailers in Edinburgh, the shoppers’ main concern was for a good range of shops in an attractive environment (Tolley, 2011). However, in 2013 the Royal Institute of Chartered Surveyors cited pedestrianisation as a cause of high street decline, with Holyhead in
Wales as an example (Deardon, 2013). This simplistic correlation ignored many other factors contributing to high street decline – most notably the way we shop. People value pedestrian-orientated environments.

Other studies have shown that retailers support and benefit from pedestrian improvements once they have been implemented (Kumar and Ross, 2006). In a 2017 survey of London’s Business Improvement more than 85% agreed that a good environment for walking and cycling is important for business performance (TfL, 2017). Repeated studies show that shoppers are more likely to have negative opinions about traffic and transport than retailers (Hass-Klau 1993, Kumar and Ross 2006, Tolley 2011.