Cheltenham Road library - not for much longer

After 53 years, the Cheltenham Road Library is closing. 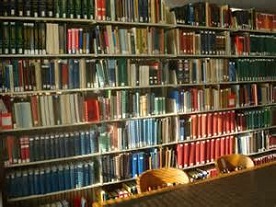 It will be relocated and replaced by a new, IT era library situated alongside the new Health Centre that is due to open very soon in the old North Bristol Baths building in the Gloucester Road.

The North District Library, as it was originally called, was opened on May 2nd 1956. Its design was the work of the City architect Nelson J. Meredith. It faces the much more eye catching and aesthetically appealing, grade 2 listed building of Colston’s Girls’School on the opposite side of the road (see below).

The library in comparison presents a modest and largely unmemorable appearance, a typical civic building of the 1950’s that had probably been designed on a tight budget.

There had however been an earlier library on this site, a much grander affair,which fully held its own

against, and somewhat reflected, the relative splendour of the school opposite – not surprisingly since both school and library were designed by the same architect, William Venn Gough, responsible for other notable Bristol buildings like Cabot Tower and Queen’s Square House in Queen’s Square. This original library was completed in 1901, just ten years after the inauguration of Colston’s Girls’ School.

It was a grand edifice and operated as a library until 1941, when it was hit by a German bomb (see below). The flames from the burning books could apparently be seen across the city.

The new library that literally rose from the ashes of its Edwardian predecessor has served the local community well for over half a century. Only now will it finally be replaced by a state of the art lending and reference library. Ironically perhaps, this has only been made possible through the conversion of the old Bristol North Baths - a building with a community history of almost 100 years, which was, when first completed, a virtual contemporary of that original library on the Cheltenham Road.