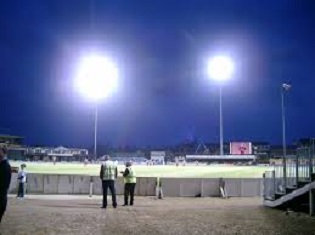 Howzat, the campaign group formed by local residents of Bishopston and Ashley Down with the original objective to challenge and revise the stadium expansion plans of Gloucestershire County Cricket Club (GCCC) report that.....

The cricket club has now submitted its application for 6 permanent floodlights at the County Ground.

While we understand that Gloucestershire County Cricket Club needs to install permanent floodlights in order to retain international cricket in Bristol, we have concerns about the vagueness of the details in the planning application it has submitted.

There are concerns that the club is asking to use the lights up to 15 times a year - far greater than any use of previous temporary floodlights.

The planning application itself gives no details of the hours during which the lights would be used. However the club has indicated that they wish the lights to stay on up to 11 pm (and one of the lights even later than that for televised games in order to derig the cameras!) with no firm commitment as to when late evening play would finish.

This is likely to result in a great deal of disruption to the lives of those living in the area near the ground, in terms of late night noise and anti social behaviour, particularly when thousands of spectators leave the ground in what is a densely populated residential area.

We also believe that the light levels from the floodlights at neighbouring properties must be limited. However, at present we cannot comment further on this as the lighting report, referred to repeatedly in the planning statement, has not yet been made available to the public.

Firm planning conditions are needed to set limits on the use of the lights and their impact on the surrounding area.

The floodlights will be 45 m in height - well over twice as high as the flats at the cricket ground - and will therefore have an impact on the skyline over a wide area.

We understand that the period of neighbour consultation will not start until the lighting report is made public.

Once that is done we will contact you again about making comments/objections about the application.

The Bishopston Society has sent the following letter to the BCC Planning department:

We are in principle opposed to 45m high fixed floodlights and their regular use throughout the year impinging on the amenity of residents living adjacent to the cricket ground.  Furthermore, the floodlighting itself will have the effect of increasing the number of evening events at the ground which will in turn increase the disruption and inconvenience for local residents.  The light towers are themselves an intrusion on the skyline and inappropriate in such close proximity to the Ashley down Conservation Area.

We would insist that the applicant be obliged to clarify in writing the following matters:

These clarifications would then become enforced planning conditions.

You can read the Gloucestershire County Cricket Club's own statement on the design and planned placing of their flooodlights here:  GCCC website