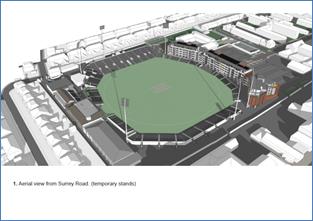 The Howzat Campaign Group have sent us the following update on the proposed floodlight planning application for the cricket ground.

Those of you who have made comments on the GCCC Floodlight Application will now have received another letter from Development Management at the Council.

This indicates that further information is available about light spillage, alternative floodlighting options which have been considered, sustainability and confirmation that there will be no aircraft warning lights on the floodlights.

The letter also invites further comments on the application by 31st December!

I have spoken to Katy Dryden, the planning officer today and can confirm the following:

We will contact you again when the Pollution Control report is available, so that you may comment further if you wish .

Documents about the application can be seen here.