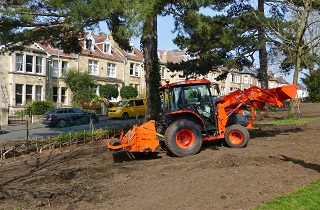 The greater the number of species in any given area, be it an ocean, a woodland or even a local park, the greater the degree of stability of the living community within it. Ultimately, higher biodiversity contributes to a more complex, aesthetically interesting, healthier and productive planet and from an anthropocentric view, that has to be a ‘good thing’.

So, let’s start at the local level. The Wildlife Group of the Friends of St Andrews Park (FoSAP) for several years now, has had as its overall aim, to increase the variety of habitats in the park and by doing so, increase the range of wild life it can support. The park’s numerous and varied mature tree species, many planted at the time it was created in 1895, provide a valuable habitat for a variety of birds, invertebrates and lichens. However, since its Victorian origins, much of the park apart from its trees has consisted of large expanses of regularly mown grass which have been the dominant habitat of the park. While earthworms and doubtless a range of other soil organisms thrive in the layer immediately below the grass, very few flowering plants, other than species like common daisies, dandelions and plantains can survive a regular mowing regime, and  even these are unable to flower unless intervals between cuts are temporarily lengthened.

Many of our most attractive insects - bees, butterflies and hoverflies -  are entirely dependent on flowers to provide them with sources of nectar and pollen. The sterile, homogeneous green lawns of St Andrews Park clearly fail to offer insects these basic dietary sources of carbohydrate and protein for their energy and growth and will therefore never be of any interest to them.

Urban gardeners are increasingly attempting to improve city environments for wild life and consequently urban green spaces can often be made (or have the potential to be made) richer in wild life than much of the pesticide-sprayed swathes of farmland that constitute much of our modern countryside. (See the article ‘Gloucester Road wild life corridor’ elsewhere in this issue).

So while in the past, urban parks have tended to resemble those rural environments largely sterilised of wild life by modern intensive agriculture, they are now seen as offering an opportunity to develop them as much more wildlife friendly environments and on a larger scale than the individual gardener can achieve. Local councils are much more willing to support neighbourhood initiatives to increase urban biodiversity and Bristol City Council is no exception.  So the FoSAP Wildlife Group, using a Neighbourhood Partnership grant and liasing with and supported by BCC, developed a project aimed at the creation of a perennial native wild flower meadow.

The Meadow, mid August 2015 - but mainly annuals this first season 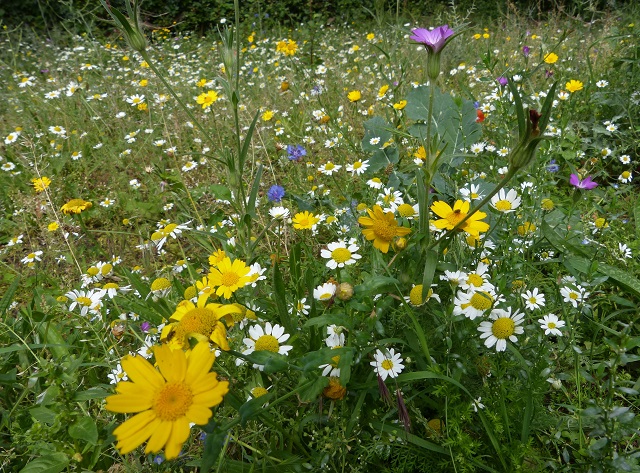 We selected native plant species, including grasses, which when in flower would provide food for adult insects but also offer foliage for the earlier larval stages to feed on. In this way we wanted to encourage insects such as various bee species to use the meadow as a pollen and nectar resource while hoping that certain butterflies, moths and a range of other species would also find suitable food plants there on which to lay their eggs.

Our first attempt to create such a meadow was made seven years ago in the north-west corner of the park, a quiet area which is not much frequented by visitors and which the Wildlife Group has unofficially adopted as the best place to develop its strategies for increasing biodiversity.*

A perennial wild flower meadow is one made up of species which only start flowering (but continue to do so for years) in the second year after being sown. Because this would result in a rather dull appearance to the meadow in its first year of growth, we decided to mix in some annual seeds with those of the perennials. This would mean there would at least be a good show of flowers in the first season even though the perennial plants would not start flowering until the following year.

Comparing catalogues of companies that specialise in selling a variety of native wild flower seeds it is soon became clear that there is a common core of species that are supplied by all these seed merchants and we made our selection largely from this common list and based on our knowledge of which species are found locally growing successfully in the wild.  Eighteen species including four wild grasses were sown. Some of the more conspicuous flowers when in flower are Black Knapweed, Birdsfoot Trefoil, Lady's Bedstraw, Meadow Buttercup, Oxeye Daisy, Yarrow, Crested Dogs Tail and Smaller Cat’s Tail. The annuals are all flowers that were once common weeds of cereal crops: Corn Chamomile, Cornflower, Corn Cockle, Corn Marigold and Common Poppy.

For the first four years, the meadow developed well, and with a mix of wild grasses and perennial flowers, it did indeed resemble a natural meadow. In summer it really was humming with insect life, the most obvious visitors being several species of bumblebee, a dozen or more hoverfly species and of course, honeybees. However, with each succeeding year, the ratio of wild grasses to wildflowers increased until it was clear that the grasses had spread so successfully they had become the dominant plants, the wildflowers being steadily ousted by them.

We realised that the grasses were ‘winning’ because the soil nutrient levels were too high, thereby benefiting grass growth over that of the wildflowers. If we were to correct this situation it was clear that we would have to get much of the layer of topsoil removed, thereby creating much more suitable low nutrient conditions in which wildflowers should flourish and be able to hold their own against the grasses.

We were faced therefore with having to create another meadow all over again, as scraping off the topsoil would effectively remove the previous seven year old meadow. Not a cheap option; but fortunately a well timed decision as there was extra money available in 2015 for green projects such as this one, thanks to the Green Capital Projects scheme. We applied and got a grant of £1,500 to cover the full costs of removing topsoil from the site and then sowing with wildflower seeds. This time round we left out wild grasses in the mix as we felt they would probably colonise naturally over time anyway. Germination from the spring sowing was a little disappointing, but a second sowing was made in the autumn. We have every confidence that the first flowering of these perennial wildflowers in spring and summer of 2016 will be successful and that the meadow will go on to develop and mature over the next decade, creating an oasis of ‘wildness’, a haven for many insects and other invertebrates and effecting a significant boost to the park’s biodiversity.

* A future article will look at these schemes to create a mixture of other habitats that further enrich the biodiversity of this area of the Park.