Clean air in Bristol – how we and the Council can respond 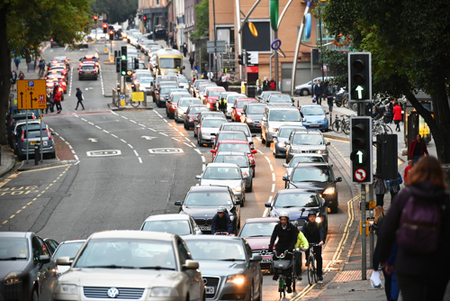 As we have seen, combating air pollution is a huge mountain to climb, both worldwide and for us locally in Bristol. 3.7 million deaths a year worldwide, 40,000 in the UK, nearly 200 in Bristol – these are huge figures but they are not insurmountable. We should not view air pollution only as a challenge, but also as an opportunity to improve health, wellbeing, transportation, the economy and, of course, the environment.

Across the world, national and municipal leaders are implementing policies to try and quell the tide of air pollution. In Beijing, citizens are only allowed to use their cars on alternate days. Closer to home, the likes of Paris and Madrid have been using this policy on an emergency basis. Meanwhile, in San Francisco, prices for parking spaces are now demand-responsive, readjusting parking patterns to make streets safer and less congested. Whilst in Istanbul, poor quality coal for heating has been banned, and in New York heating oil is being phased out.

Going forward, the Mayor has committed to implement a Clean Air Zone, to improve public awareness of air pollution, to review the location of air pollution monitors and make data collected more accessible, to replace the Council’s fleet with low emission and electric powered vans and cars, to support the introduction of hybrid and electric buses and taxis, and to promote walking and cycling through better, safer infrastructure. These plans were given unanimous support by Councillors from all parties at a recent Council meeting, so there is certainly the political will in the city to achieve this and more.

But what can local residents, and specifically the Bishopston Society, do to improve air pollution? Well, first things first, keep the pressure up on the Mayor, Councillors and other decision makers. You can also write to your MP and ask them to lobby government for more air pollution-control powers, as it’s only with these that we can introduce measures such as the Clean Air Zone.

Organisations such as the Bishopston Society, with their respected community position and wide-reaching network, are perfect vehicles for pressuring government, both local and national, to act. The Society’s potential to become the “anchor” organisation for the community makes it well placed to take up the fight against air pollution, involving multiple stakeholders in initiatives to improve the area.

In which case what "asks" could the community have? Well for example, as part of the planned review of air pollution monitors I believe we should get a monitor for Gloucester Road. We sit within Bristol’s Air Quality Management Area, but have no real-time monitoring nearby - you can view the data at http://www.bristol.airqualitydata.com/ as already discussed. I also think we should do more to enforce legislation against idling by using signs and, where necessary, fines. Nottingham and some London boroughs are leading the way on this, and we should copy them.

If you support the ideas mentioned in this article, or have some ideas of your own, The Bishopston Society committee and I would be very interested in hearing from you. The key thing I'd like to impress is that no-one has all the answers. The actions the Council has planned will help, but I'm sure we're missing many other possible measures, so this is about knowledge and idea sharing as well as actually going ahead and actually implementing the initiatives. By working together I am sure we can make a real, positive difference.

Tom Brook is Labour Co-op Councillor for Bishopston & Ashley Down -

The above is the third in a series of three related articles focused on air quality. The others are:-

1. Air pollution: a global crisis or a problem solved?, by Jim Longhurst and Ben Williams

2. Air quality in Bishopston: measurements and responses, by Gavin Spittlehouse