A short history of the Severn Beach Railway Line. 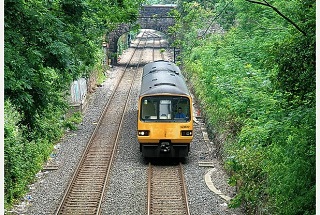 Initially this line only ran from Temple Meads to Clifton Down. It opened in 1874. The tunnel extension under the Downs to the Avon Gorge was not opened until 1877.
There was a railway line opened in 1865 running from Avonmouth to Hotwells ending at a site in the Avon Gorge just under the Suspension Bridge.

This allowed a connection to the Clifton Rocks Railway* and later to a tram terminus, an early form of a transport interchange. This line was not connected to the main network.

In 1924 the line was extended northwards from Avonmouth to Severn Beach. This is the line which we have today. Severn Beach was intended to be a seaside resort and for a while, in the ‘30s, 40’s and 50’s it was very popular, with its 100 yards long Blue Lagoon Swimming Pool, a boating lake, donkey rides, funfair and cafés.**But with the rapid increase in private cars, its heyday was over by the 1960’s as people were able to explore and more easily travel further afield for a weekend or holiday on the beach. 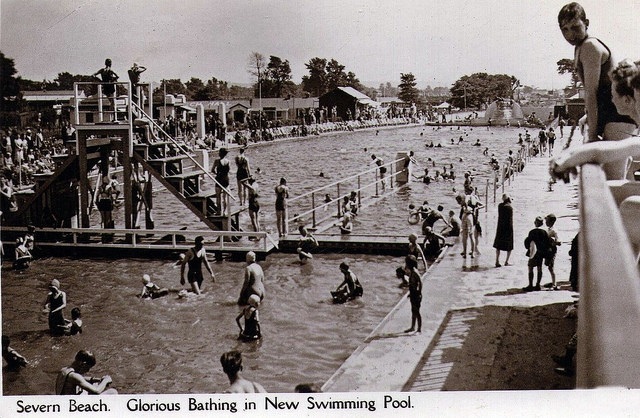 The Beeching report in 1963 recommended that the services on the line be withdrawn. This did not happen due to representations by staff and customers but in 1967 this threat arose again. Following an enquiry it was agreed that the line be kept open with a reduced service. All staff were withdrawn from the stations except at Temple Meads and fares were to be collected on the trains. This reduced the cost of running the service and resulted in reduced fares.

In the 1970s most of the track was reduced to single line except at Clifton Down and Avonmouth stations. By the 1980s the service had become unreliable and in 1995 an hourly service to Avonmouth was introduced on weekdays with a connecting bus service from Avonmouth to Severn Beach. Evenings and Saturdays some trains would run through to Severn Beach.

The line continued to operate but punctuality and cancellations were a problem. If a train was required elsewhere at short notice, then often the one on the Severn Beach line would be borrowed to fill the gap.

A campaigning group originally called Friends of the Severn Beach Railway but later known as Friends of Suburban Bristol Railways (FOSBR ) was formed at the end of the 1990s. Following a considerable amount of campaigning pressure by FOSBR directed at local councillors and MPs, Bristol City Council agreed to pay a subsidy of £450,000 per annum to fund extra services. This started in May 2008 for 3 years and produced the approximately 40 minute service during the day which we have today. Passenger figures soared which justified the subsidy. 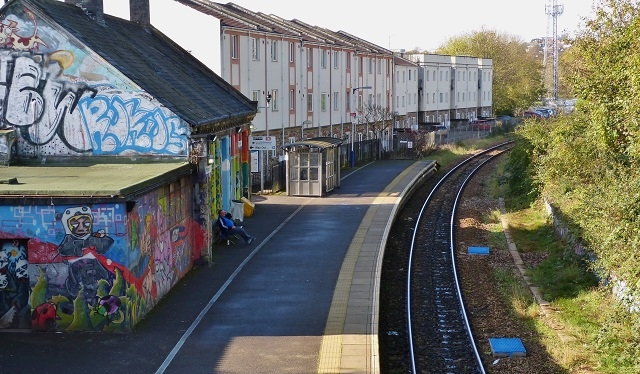 In 2011, due to the large increase in passenger numbers, the subsidy was reduced as it was no longer necessary at its previous level***. In 2015 the funding for the service will be provided at National Level.

Passenger figures continue to increase year on year. With the forthcoming four tracking on the Filton Bank (from Lawrence Hill to Abbey Wood) giving more capacity for local train services, it is reasonable to expect at least a 30 minute frequency on this line during the day. 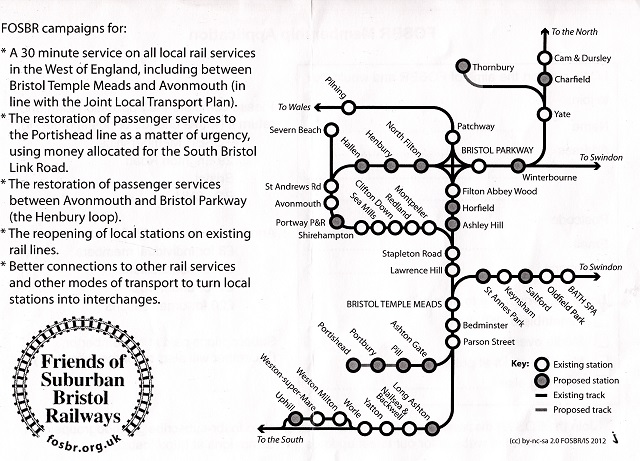 All in all it would appear that the future for our Severn Beach local line looks promising. This would also tie in with other proposed improvements to the local rail network including the re-opening of the Portishead to Temple Meads line to passenger traffic, also the opening of the Henbury Loop from Stoke Gifford to Avonmouth and the re-opening of other local stations (see the FOSBR local railways map).

* This was the underground funicular railway linking Clifton at the top of the Avon Gorge to Hotwells and Bristol Harbour at the bottom of the Gorge, in a tunnel cut through the limestone cliffs.

*** For example, taking Clifton Down, the increase in passenger numbers from the pre extra train subsidy in 2007-8, to 2011-12 was 230%  – justification indeed for the extra subsidy provided from 2009 by Bristol City Council. The passenger count in June 2014 showed an overall increase from the previous year of 16%.