What is air pollution?

The chances are that, if you are looking at this website, you are already aware of some of the worrying facts about air pollution and its effects on our health.

Either way, let's start with some basic facts about air pollution, the main sources and the substances that create it.

Millions of people in the UK are inhaling air considered too dangerous to breathe by the World Health Organisation (WHO).

Two basic questions to start with:

1. What is air pollution made up from?

Air pollution comes from a range of sources, including some nearby, like vehicles, other sources throughout the city, and some further afield. The proportion of pollution that reaches us from each source depends on the weather, the location, the time of day, and a number of other factors. Wherever you are, you’ll breathe in some of this pollution.

The main pollutants are nitrogen dioxide and particulates. Other pollutants include carbon monoxide, sulphur dioxide, ground level ozone, hydrocarbons and lead. Each one comes from a different source, has different effects on our health, and different chemical behaviours, which is why it’s hard to understand and control air pollution.

2. When are you most likely to be affected by air pollution?

Air pollution concentrations depend on the emissions level and how the emissions are dispersed in the air. A combination of still air (low dispersal) and the morning rush hour (high emissions) mean the highest pollution levels are often in the morning. There’s often a second smaller, more spread out peak in the late afternoon and evening too when people are travelling home.

Air pollution is different on different days, it’s usually lower at the weekend than on weekdays. Another important factor is ground-level ozone concentrations, which normally peak in the mid to late afternoon in summertime.

A full and detailed Royal College of Physicians report in 2016 includes the following facts:

40,000 UK deaths per year are attributed to outdoor air pollution - so what are the causative pollutants? 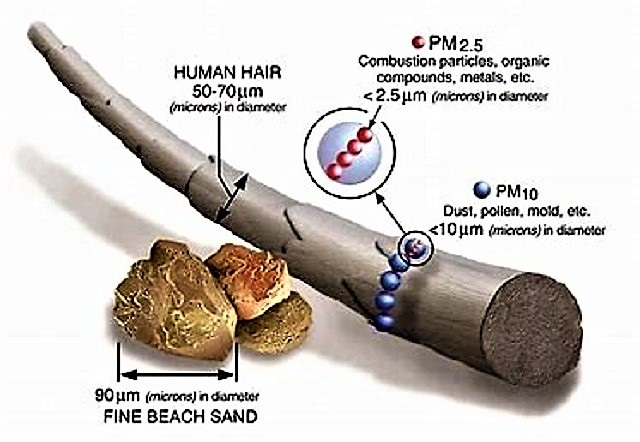