The Invisible Killer - a book review of this new publication 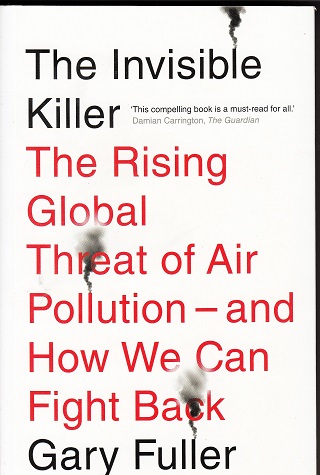 Book Review: The Invisible Killer: The Rising Global Threat of Air Pollution – and How We Can Fight Back, by Gary Fuller. Melville House UK. 2018
This new publication offers a fascinating but also frightening account of how we have come to create a world “where 95 per cent of humanity breathes air that does not meet WHO guidelines”.

The author is an air pollution scientist at Kings College London. As such he takes a scientist’s view of the problems of identifying, measuring, interpreting and understanding the complex mixtures of man-made air pollutants and their varied but always serious effects on our health. This is not a dry text book however. Fuller is an excellent communicator, writing in a way which is completely accessible to a lay person.

He begins by looking at the evidence of the filthy air in 17th century London, following this social history trail to the notorious Victorian smogs of the capital. Then we move on to the work of the early 20th century pioneers who developed effective means of sampling air to collect some of its more obvious pollutants like soot particles - scientists like John Switzer Owens who was largely responsible for transforming air pollution science into a national surveillance programme.

Fuller doesn’t duck the politics of air pollution and documents the varied fights and lobbying by pollution-causing industries to try and prevent or delay legislation to curb their air poisoning activities. There is a fascinating chapter on why lead was first added to petrol in the mid 1920s and how, even though lead was known to be a neurotoxic substance, it wasn’t until 40 years later that it was recognised that this same lead had been escaping in huge amounts into the environment from car exhausts. The US began a phased banning of lead as an additive in petrol in 1970, but it took another shameful 29 years before the UK government finally passed legislation banning it.

The full story is also teased out of how Volkswagen deliberately rigged the data submitted for their diesel exhaust emissions so that in their tests, nitrogen oxide measurements were considerably lower than the amounts produced by the same cars under normal driving conditions.

We are expertly taken through the issue of acid rain, a major environmental crisis of the 1970s and 1980s which was almost entirely the result of industrial scale burning of sulphur rich coal. A much more recent culprit of pollution arises from the cultural popularity and increasing use of the household wood burning stove, whose significance as a major source of particulates (and of course carbon dioxide) has only just been realised. The fashion for wood burning stoves is based on the view that it is a cosy thing to have in our homes. But the smoke they produce pollutes our neighbourhoods and is now having the effect of counteracting the improvements that are just beginning to be achieved in reducing vehicle-based pollution.

A chapter is devoted to looking at world-wide examples of the imposition by cities of low emission zones, various restrictions on traffic, and congestion charging in attempting to reduce levels of exhaust pollutants. Some methods are more successful than others, but the message that strongly comes through is that governments need to start to seriously prioritise the development of alternative means of transport rather than continue to apply a car centric approach to future planning of our roads and urban environments. One thing is made very clear from evidence around the world; wherever road systems are upgraded by addition of features like increased lanes or bypasses, total traffic volume also quickly increases.

Some of the other issues that are considered include the increasingly serious problem of ammonia pollution arising from farms’ animal wastes, the formation of low level ozone pollution (a completely different problem from the depletion of the ozone layer in the upper atmosphere) and the creation of particulates resulting from wear and tear on brakes, tyres and road surfaces themselves. Electric vehicles are of course just as much a source of these as any other road vehicles. In fact, because of the extra weight of comparable electric vehicles, they can generate more wear and tear particles than conventionally fuelled vehicles.

Unlike our water supply, we have been, and are still treating our air as an acceptable place to dump any waste products produced by industry or by our own individual activities. Solving the problem of improving air quality can seem a huge task, even for governments, and one that as individuals we can do little to help. Yet forty per cent of car journeys in England are less than two miles, sixty per cent less than 5 miles. A combination of walking, cycling and public transport as an alternative means of travel on these journeys would transform our cities by hugely improving their air quality and noise pollution. Additionally, this change in our behaviour would also have a significant effect in reducing global warming emissions. But just by adopting this more active life style, our long term health would also benefit considerably.

This is one of those books you wish every politician should be made to read. But inertia (and sometimes ignorance) when confronted with huge problems like tackling air pollution is not confined to governments. We can, as individuals, choose to become better informed about the subject and this book not only brilliantly provides that knowledge but it also spells out how we can all individually, and thus collectively, help make cleaner that precious and undervalued resource, the air we breathe.