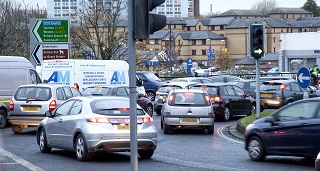 Seth Piper, Local NGO environmental activist recently wrote a piece that was highly critical of BCC's policies on dealing with the city's huge traffic problem. In his article he says:

Stand on any junction in Bristol at rush hour and look at the faces. The grim expressions of drivers, bus passengers, pedestrians and cyclists tell you everything you need to know about the experience of getting around in this city.

A year ago I moved to Bristol, and I love it here. I enjoy the laid-back attitude, the creativity and open-mindedness, as well as the huge variety of things to see and do. But the biggest disappointment has been the transport situation.

I had been under the impression that Bristol, with its reputation for sustainability and a good quality of life, would have sorted the matter of being able to get around in a pleasant and efficient way. In fact, Bristol has repeatedly been ranked as the worst city in the UK to travel around. I can sum up my own experience as a newcomer in four phases: shock, horror, fear and outrage.

First came the shock at the state of Bristol’s streets. Walking is the simplest form of transport, but obstacles are everywhere: street furniture and rubbish bins block the pavements, which are already so narrow that pedestrians regularly have to stop to let each other pass. Cars are parked on pavements on a massive scale, while delivery drivers think nothing of mounting the foot way beside parents pushing kids in buggies, endangering their lives.

People with disabilities are limited in a way that most people can’t even conceive of because of street obstacles, which is deeply unfair. The wait at pedestrian crossings feels absurdly long because of the emphasis on allowing cars to pass unhindered. If you’re patient, the green man might give you ten seconds to cross, but much of the time people give up waiting and make a run for it through the traffic. All of these irritations add up so that walking across the city is almost an ordeal. If you don’t walk in the city very often, try it, and you’ll see.

Then came the horror of Bristol public transport which, for the most part, is buses since there are currently so few departures on Bristol’s commuter train lines. Anyone who regularly takes the bus in Bristol will tell you, the experience is difficult, expensive, inconvenient and uncomfortable. Departures are infrequent, timetables are confusing, waits are long and delays are common. There is typically no information for travellers and nowhere to sit or shelter.

Fares have gone up above the rate of inflation over time. The buses themselves are often full to capacity, lurching from one stop to the next, and they are slow, with average speeds as low as six mph at peak times, and maddeningly indirect routes that snake back and forth around the city.

Experts say that 82 per cent of Bristolians would rather walk to work than get public transport, and I understand why. Meanwhile, in other cities, buses are reliable and affordable and a realistic choice for journeys to work. Transport for London customer satisfaction statistics show that bus journeys in the capital have become easy, cheap, convenient and comfortable for most travellers.

Fear is a natural reaction when navigating the streets of Bristol on a bike. Mostly I worry for my partner, who cycles across Bristol every day to get to work on a route largely without cycle paths. The very limited amount of cycling infrastructure in Bristol appears in stops and starts, is rarely protected from vehicle or pedestrian traffic, and invariably will have a car or van parked on it at some point.

Road surfaces are so bumpy or littered that cyclists have to constantly swerve to avoid potholes or broken glass. Bristol has recently been ranked as one of the most dangerous places for cyclists in the country. The experience of cycling is intimidating for all but the most dedicated cycle users, with only 30 per cent of residents rating cycling safety in Bristol as good or very good.

I regularly see car-meets-bike accidents from my window overlooking Gloucester Road. ‘Shared space’ solutions such as those found all over the city centre are an expensive disaster, pitting cyclists and pedestrians against each other and leaving neither group happy with the result. Sustrans polls have revealed that the lack of protected cycling infrastructure is the biggest reason people don’t feel safe to ride a bike, which could be solved with enough effort and investment from decision makers with a clear vision.

Outrage is the only appropriate response when you realise that Bristol is in the midst of an air pollution crisis, largely due to vehicle emissions, with health implications that are just now becoming clear. Experts say air pollution caused by motor vehicles kills hundreds of people every year in Bristol, meaning it is behind almost one in ten deaths.

Transport researcher Jess Read has stated that children living in Bristol will typically have breathed polluted air which is the equivalent of a thousand cigarettes in the last two years. Children’s lungs are not developing fully as a result of the dirty air they are breathing, which will lead to lifelong problems for some of them. Not to mention the effect of all these emissions on the global climate and the consequences for future generations. This situation is not inevitable, it is the direct result of our choices as a city.

Transport is a social justice issue. It’s people in some of the poorest Bristol wards who pay the price for bad transport policies, being less likely to own a car and more likely to be reliant on slow and unreliable bus services, or slow and unpleasant walking journeys.

Residents in areas of high levels of deprivation have fewer opportunities to access green spaces and are more likely to be exposed to worse air pollution as well as a disproportionate level of traffic injuries. Bristol’s transport systems and policies in effect punish people who make positive, sustainable travel choices and reward the behaviour which is the cause of the majority of the problems; unnecessary car journeys.

Cars are used for almost half of journeys under 2km, which is walking distance for most of us. The number of cars and vans owned in Bristol has almost doubled since 2001 to 309,762 at the last count. When politicians talk about ‘traffic’ they almost always mean motor traffic, assuming that ‘everyone’ drives, but if every person in Bristol actually did drive, the streets would inevitably come to a complete standstill. Drivers are not exactly happy with the traffic situation either, with no solution in sight for the endless congestion and shockingly slow traffic speeds (among the slowest in the country).

One thing which is clear to me is that the current leadership of Bristol council are lacking courage in tackling the issue of transport. Consultations have shown that the public are keen to see more radical transport plans for Bristol and want the council to be ambitious with approaches, but the recently published Bristol Transport Strategy draft seems heavy on aims and objectives and very light on actual measures which the council plan to implement.

Early indications are that the proposed Clean Air Zones will fall hugely short of what is needed, with weak restrictions on only the most polluting vehicles and talk of ‘increased traffic flow’, which really means giving even more traffic light priority to motor traffic at the expense of those who walk and cycle.

We are expected to accept illegal and dangerous levels of air pollution, and the ill health and suffering that results from it, because our politicians are afraid to take action which they are told might upset drivers or businesses.

The typical response from council leaders is that Bristol’s funding crisis means that they are unable to implement significant measures to improve the problems related to transport. But there are actually a whole range of powers at their disposal which could improve conditions for walking, cycling and bus travel in the short term without major investment, such as designating more one-way streets, removing on-street parking spaces for cars, altering traffic light sequencing and introducing zebra crossings to make walking more attractive, or introducing zero tolerance for vehicles blocking bike lanes.

The people of Bristol are in desperate need of leadership and meaningful action, and in my opinion, emergency measures would be justified. Walking, cycling and public transport can and should be the easiest, quickest and cheapest way of getting around the city, and this can only happen if our elected officials are willing to introduce disincentive measures to reduce the number of car journeys at the same time as they incentivise positive alternatives.

Transport is in crisis and people are already paying with their lives, and this is before you consider that the population of Bristol is going to grow significantly in the next decades. It’s about survival, it’s about health, and it’s about quality of life. What could be more important?