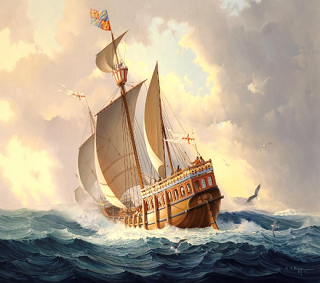 Bristol’s Age of Discovery, 1470-1508. Talk on Thursday April 19th at 7.30pm at Bishopston Library, Gloucester Rd. More intriguing facts and hitherto unknown evidence about this period of exploration and its connections with Bristol will be revealed by Dr Evan Davis, University of Bristol at this event in Bishopston Library.

John Cabot's voyage to North America in 1497, on the Matthew of Bristol, has long been famous. Many of us have set foot on the replica ship. But who was Cabot? Why did he come to Bristol? And what did he achieve? We do know that under the commission of Henry VIII Cabot was the first European to explore the North American coast after the Norse visits in the eleventh century.

However Dr Evans and his research team have delved deeper into this period, and he will be talking about the bizarre genesis of the Cabot Project, a project of international renown.

Although John Cabot is at the heart of the story, his three expeditions are set in the context of the discovery enterprises funded and led by Bristol's merchants over many decades.

This talk will appeal to those who have a specific interest in maritime history, but also will be of interest to those who want to understand more about the development of Bristol, why the interest in North America and the process of untangling new evidence from a wide range of international sources.

Dr Evan Jones is a senior lecturer in economic and social history at the University of Bristol, where he specializes in the maritime history of Bristol in the fifteenth and sixteenth centuries. Margaret M. Condon is the chief researcher on the Cabot Project. The author of several important articles on the reign of Henry VII, she has long expertise in late medieval administrative history.

The story so far in REDISCOVERING JOHN CABOT: Bristol’s Age of Discovery, 1470-1508 by Dr Evan and Margaret Condon will be on sale at a discounted price of £10.

Tickets £3 at the library or online here (purchase beforehand is recommended as seating is limited).

There will be a cash bar with quality fruit juices, coffee, and tea . Doors open at 7pm. This event is organised by the Friends of Bishopston Library: https://www.facebook.com/bishopstonlibrary/

The Bishopston Society
The waterside walkway between the new cut and Cumberland Road, now known as the chocolate path, was built when the Bristol Harbour Railway linked Ashton Bridge with Wapping Wharf in 1906. According to Simon Hickman, principal historic buildings inspector for Historic England in the South West region, this particular section of the cut “has always been dodgy”.

Sarah WebbSaturday 25 January
Great to see dedicated routes for cyclists, but not so keen on a cafe at sea wall bringing extra traffic and turning part of the unspoilt Downs into a car park!

The Bishopston Society
The billboard on York Road is now used for regularly changing artworks rather than corporate advertising, with Colin Moody’s photograph a way of saying thank you to the people who keep our streets clean and tidy.

The Bishopston Society
Primary pollutants emitted during Sunday evening, including particulates from domestic wood burning in residential areas, are contributing to the spike – which is not dispersing quickly due to the cold and still weather.

The Bishopston Society
The Bristol Pound currency has been in operation for seven years and was a trailblazer in contactless and smartphone payments.

@bathwickianBathwickian
Time to work with our neighbours in Bristol on raising awareness of the contribution wood burners make to particula… https://t.co/yhVAKoemVm
Link to post

@BishSocThe Bishopston Society
Are you interested in becoming part of the Bristol's Citizens' Panel? https://t.co/SOZq3RZOsY
Link to post

@BishSocThe Bishopston Society
No city needs to have woodburning stoves/open fires if there is mains gas and electricity available. The dire impac… https://t.co/g1ALJAxD0z
Link to post