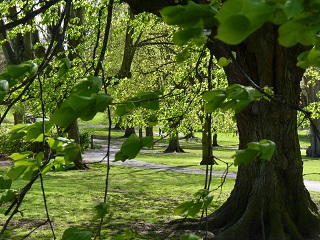 Minutes of the Tree Forum meeting on Monday April 14th 2014 in City Hall, including trees on the Bristol University estate, and Green Capital proposals re trees.

1 Clive Stevens, opened the meeting at 6.05pm by running through 18 items of news
that had been sent him, 4 notes on forthcoming events, and very briefly 5 matters
arising from the last meeting.
Late news: John Connell of Classic Landscapes is willing to provide a tree of 10-12cm free of charge for any planting event.

2 Bristol University: Michele Lavelle gave an impressive presentation about the 180
ha University estate, and the 4931 trees of 126 genera within it. She noted that this
represented some 28 trees a hectare, which was in excess of the 30% canopy cover
which the city aspired to. In the last five years some 196 trees had been felled, and
1032 planted, a higher ratio of replanting that the council required. There was public
access to this estate, a website covering the trees, and plans both for a book and a tree
trail.
At the end the question was raised about the lack of public consultation for the Stoke
Lodge site and the danger that the example of justifying felling by planting elsewhere
posed, and it was accepted that there was a need to explain plans to residents’ groups.
Debate centred on whether the University (and Zoo for example) are special cases and
although it is recognised that they are professional estate managers compared with, at
the other end of the scale, speculative developers, it is very important that the BTRS
principle applies to all. At the meeting Claire Harbinson explained that for less
common trees the 16-18cm requirement could be relaxed and previously discussions
have been about defining the ownership and development lines a bit smarter
especially in Conservation Areas.
Action: Tree Forum encourages Bristol University to meet with BCC Planning ASAP
to iron out any misunderstandings. This is very important

3 After a brief break the three Green Capital proposals were outlined;
-to create an external Bristol Tree Fund;
-to create a series of city wide tree trails;
-and to design in tree planting to the planning and development process.
Councillor Negus mentioned several ideas, such as memorial street trees, listing trees
under the localism act to list community assets, using both the city Pin Point website
and the Woodland Trust ancient tree site.
The Forum agreed to these three nominations.

4 PiPS: Mellie May gave a presentation on the PiPS scheme, taking the whole room
back to their primary school assembly days, and the drive and enthusiasm were very
inspiring.

5 Budget Cuts. It had been hoped that Gus Hoyt would be able to be present, but he
had been unavoidably delayed. Councillor Negus said that there was hope that money
had been found for maintenance, and that he would set up a meeting for the Chair
with the Mayor.
Postscript, we received an apology early Tuesday morning, Assistant Mayor Hoyt
offered to write a short piece about the status of the budget numbers but the Chair felt
it would be better to wait for the Council Officers to give the final numbers due in 6
weeks (from the meeting).

6 John Tarlton briefly outlined his and Vassili’s paper on Sustainable Tree
Management, smarter ways of working in the new funding environment, and it was
agreed to:
Actions: All would send their comments to John Tarlton
suggested deadline by May 14th, and then if necessary a working party be set up by
the chair to look at key issues, such as tree costs, sponsorships, other funding sources
etc. This topic will be on the next meeting’s agenda.

The meeting ended at 8.02pm

Other information:
- Next meeting 30th June at 18.05 in City Hall; agenda to include Forest of Avon Trust
and monetary value of tree benefits (cleaning air pollution). And further work on the
Sustainable Tree Management paper and probably more on PiPS and maybe
Greenways (joining up green spaces by greening the existing routes)
Please submit other topics for consideration to the Chair
- Tree Champion Coordinator Jim Smith would like to
create a register of all Bristol’s TreeChampions. Please contact Jim
Website: here
Chair: