Details
Category: Other news and events
Published: 14 May 2015 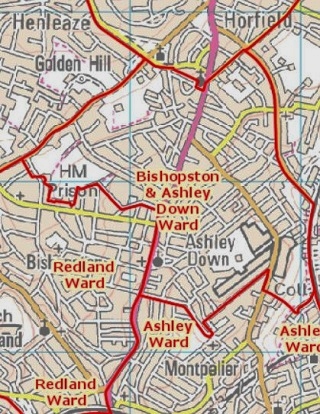 The Local Government Boundary Commission for England has published its final recommendations:
“The Commission has now completed its review of Bristol.

A summary of the Commission’s report setting out its final recommendations for Bristol City Council and a full copy of the report is available on the Local Government Boundary Commission website here . An interactive map of the final recommendations is available here.
The changes proposed for Bristol City Council must now be implemented by order subject to Parliamentary scrutiny. A draft Order – the legal document which brings into force the recommendations – will be laid in Parliament.The draft Order will provide for new electoral arrangements for Bristol to be implemented at the local elections in 2016.”
Check on the map above for the detail, but essentially
•    Redland Ward will now extend as far as Horfield prison
•    St Andrews will no longer be in Redland ward but be in an extended Ashley Ward
•    Bishopston Ward will extend slightly further north and be called Bishopston and   Ashley Down Ward.
The Bishopston Society sent in recommendations which requested that either  Bishopston ward should extend further south towards The Arches to include the area most people think of as “Bishopston”, or at least that Redland ward be renamed Bishopston South and Redland …we did try but to no avail!