An appeal for the creation of a new all Men's choir 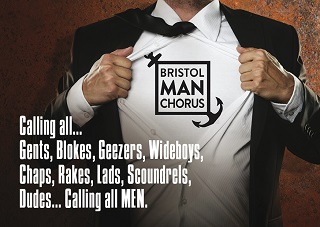 Unto us a Man Choir is born.

About 8 years ago I moved back to Bristol after 15 years in rural Normandy. I was astonished & thrilled by the rich diversity of the city's choral life, & particularly the explosion of the community choir movement which seemed to have come from nowhere to revolutionise access to group singing for all people, regardless of previous experience.

In 2009 I started the Gurt Lush Choir, & was delighted to find myself leading over 200 people a mere 9 months later. Since then 'The Lush' has gone from strength to strength, regularly filling the Colston Hall & collaborating with such illustrious forces as Andy Sheppard, Bristol Schools Philharmonia, Sam Lee, Opera Anywhere, Kathryn Tickell, The Fantasy Orchestra & dozens more..... We have a great singing life. However, we have a problem that we share with almost every mixed choir in England. We are top-heavy. Not enough men, but there is a glimmer of hope.

We all know that, actually, men love to sing. The football terraces of course. Perhaps in the shower. And many countries in the world have cultures where singing is predominantly a male activity. Much of Russia, Iceland, the Baltic states & of course Wales, famously so. In most of Africa everybody sings, & men are very much at the forefront. It's clearly not genetic, but cultural.

There is evidence that men feel more comfortable singing with men only groups. It is not clear why, although it's easy to theorise, -but it works. Bristol Male Voice Choir & The Great Western Chorus of Bristol boast some 70 and 50 members respectively, & though that might not seem many in total next to the 250-strong Gurt Lush, both choirs have more men than we do!

There is a new singing movement spreading across the globe. Or more precisely, spreading across the parts of the globe which were in danger of losing their men singers altogether. It can be argued that these are simply all male community choirs, rejecting the formal dress codes traditionally associated with male voice & barbershop traditions, & seeking out & embracing music from other world cultures.

But there is also, inherent in the repertoire, a half tongue-in-cheek, half deadly serious interpretation of 'new-manliness', (whatever that is), & all the contradiction & challenges therein.

It's hard to explain further without example &, more articulate than a thousand words, I would suggest this clip of the 'Spooky Men's Chorale' singing 'We are not a men's group': here

Clearly this new movement is not going to solve the “national men singing crisis” overnight. But the community choir revolution certainly changed the country's musical landscape in a small but permanent way, so who knows? It can only help.

Anyway, we intend to do our bit, hence our new project. For details on when in January 2015 it starts and how to join see: Bristol MAN Chorus

For those impatient for further examples of the genre, I would refer you to our 'Extreme Awesome ManSinging' youtube playlist: here