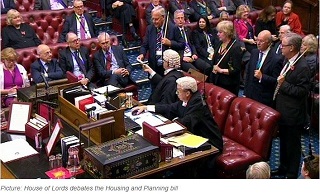 One of Civic Voice's main campaigns, a Right of Appeal, received Peers' backing in the House of Lords this week, winning majority votes on Civic Voice's recommended amendments to the Housing and Planning Bill. Peers have defeated the government on a vote to ensure parish councils and local forums have a ‘community right of appeal’ against decisions that conflict with their neighbourhood plans.

The House of Lords this week voted by 251 votes to 194 for the amendment to the Housing and Planning Bill, tabled by Liberal Democrat peers Baroness Kate Parminter and Lord Matthew Taylor, along with Labour peer, Roy Kennedy.

Under reforms introduced by the previous coalition government, parish councils and neighborhood forums can set out priorities for development through a Neighbourhood Plan. However, opposition peers, Civic Voice, CPRE and NALC argued that there is not a sufficient right of appeal for a neighbourhood planning body in cases where a local authority has granted permission for a scheme that conflicts with the neighbourhood plan.

Baroness Parminter said: “Why, bluntly, should local people go to the effort of producing a neighbourhood plan if such plans can be ignored when councils make decisions on planning applications and the opportunity to challenge is through costly judicial reviews?”.

The bill returns to the House of Lords for the final report stage sitting on Monday.