On track for a healthy, sustainable local economy 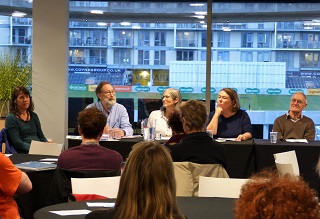 The Gloucester Road and its independent traders and businesses appear to be on track towards a future healthy, sustainable local economy.

This was the general consensus that came out of the lively panel-based meeting run by The Bishopston Society on 17th April 2018.

The public meeting was set up to consider the future of the Gloucester Road and the economy of Bishopston. Will it continue to thrive? And how might it need to change in order to do so?

A panel of experts was questioned by the audience on their opinions, and stimulated wide-ranging discussions, using the popular BBC "Question Time" format. 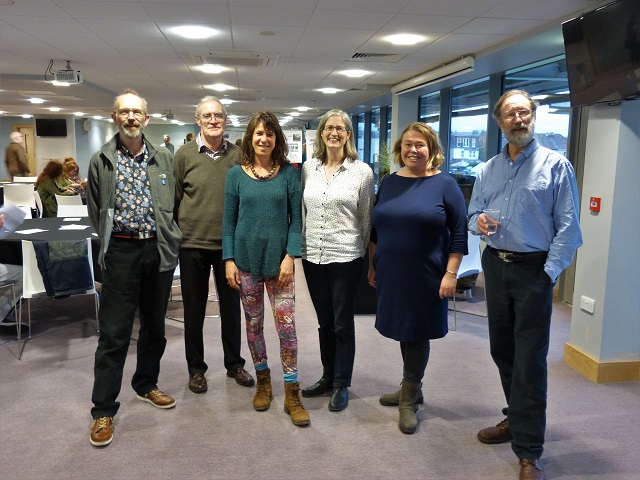 Nick Plant, Bishopston Society chair (left) welcomes panelists (left to night) Peter Browne, Sarah Thorp, Eleanor Combley, Anne-Louise Perez and Chris Wallace With lively discussions and varied views expressed, it was clear at the end of a stimulating evening that the Gloucester Road is generally in good health, with the exception of  air pollution and traffic problems, notwithstanding the traffic fumes!, and there are a variety of ways for it to evolve in the next few years.

Many interesting thoughts and suggestions emerged on a range of topics - some highlights follow.

Chris Wallace gave a summary of the changing pattern of businesses and shops in a historical context, highllighting some significant trends. For example, since 1939 there have been 38 more eating places, 23 more takeaways, 13 more hairdressers but 40 less clothes shops, 33 fewer butchers, and 22 fewer confectioners. If one were to naively project these trends forward 10 years, Gloucester Road would be a street of eating and pampering places!

Anne-Louise Perez of Gloucester Road Business Improvement District (GRBID) felt very positive about the future. The big chains are not able to provide for or respond quickly enough to what shoppers want, while the local independents can offer innovation, creativity and ‘an experience’ that makes shoppers want to come back.

Peter Browne of Gloucester Road Enterprise and Trade (GRE&T) pointed out that businesses where you can speak to someone knowledgeable will always be popular.

As Eleanor Combley, local Green councillor said, despite the presence of large local supermarkets and Cribbs Causeway, people continue to shop on the Gloucester Road because to do so is a positive experience, and this needs to be the basis for building a healthy relationship between traders, shoppers and the local community.

GRBID has a £50,000 a year budget and has been working to improve the street scene for both traders and shoppers. Installation of Christmas lights and the organisation of the Winter Wanderland project have both had positive effects on footfall and use of restaurants and cafes.

In conjunction with St Mungo’s, the charity for the homeless, money has been spent on sites for contactless donations. A free map, ‘Guide to Bristol’s Independent District’ has been designed. This identifies all the retailers, services, cafes, restaurants and other businesses located along the Cheltenham Road, Zetland Road, and south end of the Gloucester Road up to St Michaels church: see GRBID's web site.

Internet shopping - a boost not a drain

Anne-Louise, Peter Browne, and Sarah Thorp of Gloucester Road Rd Central all felt that to remain healthy, the independents must also involve themselves in operating parallel online businesses if they are to compete successfully with internet buying and home delivery services provided by large companies.

Sarah, as a local trader herself, has found that online trading has worked successfully in increasing footfall. Anne Louise reported on an initiative now being developed with local traders for a home delivery service of a variety of goods, particularly food items, using electric bikes. Chris suggested that if only shopping trolleys were somehow made to be more cool….

Sarah also stated that the use of social media like Facebook has had a  positive effect in helping to create a community of loyal local shoppers and the traders who run the shops they visit.

Keeping people informed about activities like Gloucester Road Central’s ‘Mayfest’ event and their successful developments in greening up the High Street are easily achieved through use of social media, which are also a valuable tool in allowing traders to support each other.

"Community feel" and the cafe culture

It is hoped that the traders along the section around Ashley Down Road junction and north of there will also come together to develop their own sense of a distinct, vibrant shopping community.

The present trend for more cafés and take away food outlets opening along the High Street is generally seen in a positive light, indicating there is a social need for such facilities, and as such they can perform a valuable part in creating a feeling of community. As Sarah said, you can’t get coffee shops and hairdressers online.

Problems relating to green issues were raised by several contributors. With more cafés and takeaway food outlets, there is a linked problem of increased litter. Council grants to deal with this and related problems of tagging and graffiti have all but dried up.

GRBID has agreed at the moment to fund this work but future funding is uncertain. Individual shops are now beginning to sell reusable bags. A zero waste shop is due to open soon on the Road. 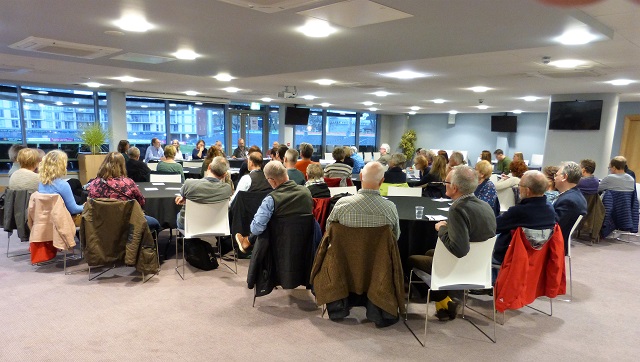 The one area of real concern, expressed by members of both the panel and the audience, was the levels of pollution created by the heavy traffic to which both shoppers and traders are exposed.

There is clearly no simple solution to this. And with major housing developments going on in Filton, this situation is not going to improve quickly.

But we were reminded that at peak times up to a third of the traffic along the road consists of bikes. If cyclists felt safer, with dedicated and physically separated bike lanes, more people would take up the cycling option.

Clean air tactics we can take

We were invited to get involved in considering Bristol’s pollution problems by downloading an app game ‘ClairCity Skylines’ which emerges from a UWE project. Free download from bit.ly/PlayBristol.

And we were informed that there are several local walking maps showing various routes around the Bishopston area including to Southmead hospital.

As local residents, we can help reduce pollution by not using our cars to go shopping along the Road. Walking rather than driving children to and from school would similarly have a significant effect on local pollution levels.

It was suggested from the audience that an active campaign be promoted to discourage cars and vans from leaving their engines idling. A serious look at the provision and type of pedestrian crossings along the Gloucester Road could have the potential to both improve traffic flow and make crossing the road safer for pedestrians.

Work in these area by the Clean Air Bishopston project team is now well advanced, and launch of this exciting new project by Bishopton Society and its partners (previewed here) is coming soon......the project logo shown here being unveiled for the first time in public!

There were some interesting final closing thoughts from the meeting including:-

The meeting concluded with a lively series of shout-outs and miscellaneous announcements from local organisations and individuals on current events and upcoming events of interest, in the Society's popular "Open Forum" slot.

Nick Plant called from the chair for anyone interested in helping follow up the meeting, or otherwise helping the society, to get in touch for a conversation about volunteering with us to continue developing our work or working up  their own ideas.

You may also be interested in Bishopston Voice's meeting report "Lively debate on future of Glos Rd trade".

To see our coverage of this initiative beforehand you may wish to see this article.