Details
Category: Our news and events
Published: 15 May 2010

Over 40 people attended the Bishopston Society meeting on the 22 March 2010 at St Michael's Church Hall. The Chair mentioned that the website is 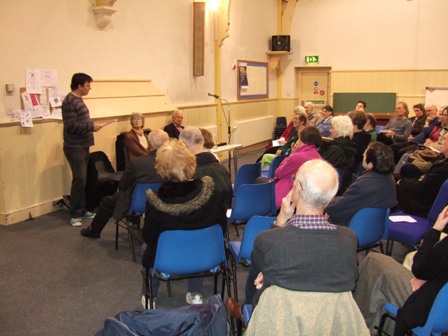 now up and running and do let us know if you have any suggestions for articles/information you would like to see on the site. The meeting was largely taken up with a useful talk from two speakers, Councillor Neil Harrison

and a representative of St John’s Residents Association, about the operation of a Cumulative Impact Area (CIA) for Whiteladies Road.

Consultation on a proposal for a CIA for a stretch of the Gloucester Rd-from Ashley Down Road to the Arches - taking in Zetland Road - has recently taken place in this area. A CIA enables the police and local authority to have greater powers in granting new licensing or significant variations of existing licenses in respect of premises that primarily sell alcohol for consumption on the premises, other late night uses, and restaurants and take away outlets. Weight will be given to the views of local residents and whether the proposals are meeting local needs.

In Bristol there are currently two CIAs - the City Centre area and Whiteladies Road. The Council are now considering a proposal for one in Bishopston. This was a result of a request from the police and was supported by the two residential amenity groups and the local ward councillors.The police have reported a 22% increase of alcohol related crime in this area. Being primarily a residential area much of the emphasis will be on the need to promote the prevention of the public nuisance. A CIA is not a tool for getting rid of existing licensed premises nor is it a blanket ban on new licensed premises.  Each application will be looked at on its merits. There could also be scope for licensed premises to offer new attractions to meet local needs eg family entertainment.

We believe that more licensed premises, fast food outlets and extended hours of operation will continue to undermine the precarious balance between those who want a “vibrant” street scene and the quality of life of local residents. We feel that a proposal for a CIA is very positive as it gives councillors and residents the opportunity to shape their neighbourhood. We came away from the meeting with the message that we can as individuals make a difference to our area, especially nearby residents who are prepared to object to licensing applications. More information about licensing and a CIA can be obtained by telephone (0117 9142511) or on the Bristol City Council web site.