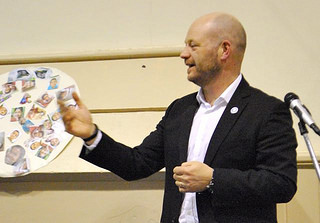 A well-attended public meeting held on 30 March 2015 not only heard four contrasting but equally interesting guest presentations, but also a range of lively interventions from the audience.

Despite the competing attractions of the NHS hustings in the main hall next door, there was a full house to hear from Barra Mac Ruairi, Strategic Director of Place at Bristol City Council: councillors Daniella Radice and Martin Fodor, on the Walking Map Project and the North Bristol Baths project respectively; and Liz Kew from Streetscene.

The evening was completed by the members of the audience who engaged with enthusiasm in discussions on a wide-ranging variety of topics.

Our first speaker, Daniella Radice, updated us on progress on the Walking Map Project.  This is being launched on 16 May.  Seven routes have been chosen for purpose and for pleasure, and have been mapped with the help of the Our Place project.  The maps will be linked to the Ramblers website.

Our second speaker was Barra Mac Ruairi, relatively recently installed as Strategic Director of Place at Bristol City Council.  His role is to try to improve the infrastructure of Bristol all the way from street level to large developments such as the Temple Meads enterprise zone, with its planned Arena, and the knock-on effects of rail electrification. Other areas within his remit are housing development, and residents parking schemes.

An exciting plan stemming from Bristol's role as Green Capital of Europe for 2015 is the Energy Scheme, which is to be set up by the Council in competition with the Big Six.  People who choose to have their energy provided by the Council will not only save money, but also enable the Council to off-set any profits made against cuts in central government funding. Such schemes are already in place in several European cities.

Barra took a number of questions from the floor.  On the subject of business rates, and what businesses get for their money, he pointed out that the rates are fixed by central government, and that local councils are only given a small proportion of the amounts levied.

A question about bus transport generated several contributions.  Barra agreed with the feeling of the meeting that smart ticketing is long overdue in the city, but said that this was in the hands of the bus companies.  He said that the council has been in talks with the new MD of First Bus, and there is a new fleet on stream with hybrid vehicles.

Another questioner took Barra to task over the low number of apprenticeships in the Council, which are apparently less in total than in Leeds City parks department.

Barra's talk generated a lot of energy and animated discussion in the room, for which we are very grateful. It shows how much people are interested in their area and their city.

We next heard from Liz Kew, accompanied by Rob Umphray, Chair of Bishopston, Cotham and Redland Streetscene Group.  The Group has evolved from Liz's early “guerrilla” days of cleaning graffiti and taking down flyers.  A variety of different approaches are being used  -  from Street Champions to Community Pay-back, from checking waste provision in planning applications to involving younger people via social media.

The next meeting of Street Champions/Volunteers is to be held on Wednesday 29 April at 6:30 in the rear room of Boston Tea Party.  Anyone is welcome.

There is to be a Social Media workshop at the Gloucestershire Cricket Club on Tuesday 12 May at 6:30.  This is a ticketed event, but the BCR Neighbourhood Partnership website will have details on how to apply.

Our final speaker, Martin Fodor, updated us on the position with North Bristol Baths development.  He was joined by Linda Buczek, who is Practice Manager at the Bishopston Medical Practice, who are waiting to move in to the new development once it is finished.  Delays continue to plague the project  -  it is not expected that the building will be ready before June or July. Linda expressed the Practice's gratitude for the support they had received from the Council, but expressed her frustration, evidently shared by Martin, that firm answers on a completion date still proved elusive.

After thanking the speakers, our Chair, Elinor Edwards, made an appeal for members to involve themselves in the Bishopston Society by joining the Committee.  She and Rose Boswell, the Secretary, are standing down later this year, and so the need for more volunteers is becoming pressing.

During the traditional Open Forum, Sarah Thorpe from Glos Road Central mentioned the MayFest, when Bishop Road will be closed to traffic, there will be various stands, and a good time for all is anticipated!

STOP PRESS  :  The Bishopston Society AGM will take place on 28 September at 7:30 in St Michael's church hall  -  speakers to be announced.