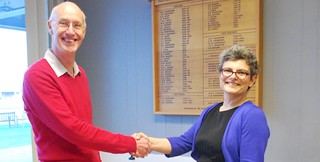 A new smart venue in the Gloucestershire Cricket Club’s  Pavilion building, a record attendance of 75 people, two interesting topics introduced by local speakers and a fascinating and amusing talk by our main guest, the Bristol West MP, Thangam Debbonaire, all added up to the creation of one of the Society’s most enjoyable and successful Public Meetings, held on April 15th.

Jamie Carstairs has been at the forefront of attempts to save the Memorial Rugby Ground Ground as a War Memorial in perpetuity. The Bishopston Society has been able to support his efforts by getting the site listed by the Council as an Asset of Community Value.  Jamie updated us on the latest news of the purchase of the Ground by Wael Al-Qadi, with the hope that this will bode well for the future of the Ground. Jamie is hoping to set up a Friends of the Memorial Ground group which would bring together people with disparate interests in the future use of the Memorial Ground and he appealed for anyone interested in forming such a group to sign up after the meeting. A small display illustrating features Jamie had described was set up in the room. Further information can be seen on our website here  and  here 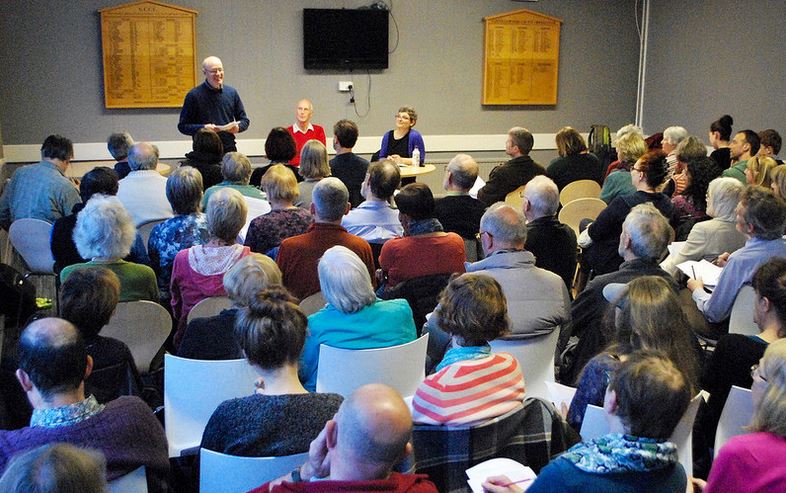 Colin Thomas then gave a brief outline of the life of the local First World War conscientious objector, Walter Ayles, for whom a Blue Plaque has been awarded and the unveiling of which will be carried out at 3.30 pm on Sunday April 17th at 12, Station Road off Ashley Down Road (see here).  He thanked the Bishopston Society for its donation towards the cost of the Blue Plaque and said that a newly published book on Ayles’ life will be available at the unveiling ceremony.

Thangam’s talk which followed was a fast moving account of her first year as an MP, and since January as Shadow Minister for Arts and Culture. She now also chairs the All Party group on refugees. So it was clear a lot has happened to her in the last year, not least the additional stress of breast cancer diagnosed last June and the courses of chemotherapy she has had to undergo - ‘a rude interruption’- and which she has somehow accommodated into her extraordinary parliamentary work load.

It is Thangam’s enthusiasm for and willingness to push herself into her work (despite the worries of her oncologist) which came over strongly in her whirlwind talk. She told us how from the moment she found she had won the vote for Bristol West on the Friday morning after polling day, she was told she was expected to present herself for work on Monday in the House of Commons – a place she described later in her talk as a really beautiful building and one she invited us to visit soon before it is closed for several years for major repairs. 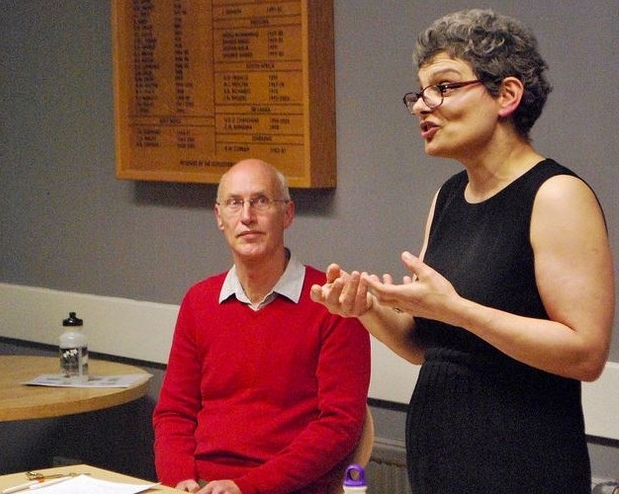 Thangam has the dubious distinction of being the most petitioned MP in parliament, explained in part, surely, by the political interest and involvement of her constituency demographic of which Bishopston and the BS7 area form a significant part. Thangam identified ‘Bees and Badgers’, i.e. green/environmental subjects as being of particular concern to those petitioning her. She was at pains to point out that most of the petitions she receives, (seen by her admin assistants, but not her) are identical rather ‘blunt weapons’, and in many cases they will be pushing for actions for which she is already in complete agreement. Where possible, she advised targeting Government MPs and ministers with these petitions would be more effective. What she has to try and prioritise are the individual ‘casework’ emails she receives that require personal follow up and individual replies from her. 70% of this casework is related to problems people have with immigration and housing. A question from the audience later asked how she operates when dealing with the Council.  Thangam explained that her office works with council officers rather than councillors, and she also has regular, sometimes monthly meetings with the mayor. One of her aims is to get her support team visiting constituents and operating in the constituency year round, not just at election times.

The Arts are essential

Moving on to talk about her role as Shadow Minister for Arts and Culture, she pointed out that the only thing she has been trained for in her working life is as a professional classical cellist, something which clearly provides her with an understanding and appreciation of the value of the Arts in society. She feels strongly that we should all have the opportunity to enjoy and perform in the Arts. Her political inspiration is Jennie Lee who was the first Minister to be appointed for the Arts in Harold Wilson’s government in the ‘60s, and in quoting Lee: ‘Art gives us joy and makes us human’, Thangam clearly indicated how important she considers her ministerial role to be in fighting for and supporting the Arts as an integral and vital aspect of our experience, both in schools and in our post-educational lives.

In touch with local issues

Thangam touched on local issues that she has been or is still involved with including the North Bristol Baths conversion, which is moving forward albeit slowly; the coming 50th anniversary of the St Pauls Carnival; the reopening of the Ashley Down station; and the installation of the GCC floodlights. On this latter subject she said she had been assured by the Club that they had no intention of extending use of the lights beyond what had been agreed in the planning application. She felt that although people were upset by these lights, sometimes, by choosing to live in large urban environments, we have to face situations where it is useful to take a somewhat pragmatic view and be willing to tolerate our 'neighbours' activities, even if we disapprove sometimes, in the cause of mutual neighbourliness and generally getting on together.

Also very briefly mentioned were the Labour Party’s serious concerns about the push by the government for the ‘academisation’ of all schools which Labour believes should never be allowed to be freed from their accountability to and links with local councils. Concerning the Health Service, if Labour gets back into government, it will be presented with a very difficult task of trying to reverse the Tory’s policy of steadily ‘selling off’ the NHS. Having had discussions with NHS staff, a complete reorganisation by Labour is clearly not a process they would willingly undergo after suffering from the accumulation of so many radical changes brought in over the last few years by the Alliance and now the present Tory government.

Participation from the floor

The last part of the meeting was given over to questions and contributions from the audience. Linda Buczec, the manager of the Bishopston Medical Practice, gave a brief update on the future base of the Practice now that the delay in the Baths conversion has prevented them from setting up their surgery there. Nevil Road will be where they operate for the short and possibly medium term.

Sarah Thorp reminded us of the Gloucester Road Central’s Mayfest on Saturday, May 7th. Details of this are on our website here.

Chris Wallace who has created the website The Gloucester Road Story raised the issue of apparent lack of communication between the Gloucester Road Traders (who have secured money from their bid for a Business Improvement District grant) and local residents on the question of how this money might be spent.

As a largely ‘green- oriented’ audience, we were encouraged by the observation of one local garden owner who during the week had identified 5 species of Bumblebee queens making use of her garden to collect nectar and pollen and perhaps also to discover potential nest sites.

During the social half hour at the end of the evening, we broke with tradition by offering non alcoholic refreshments - a choice of delicious apple juices and also home made slices of chocolate cake.