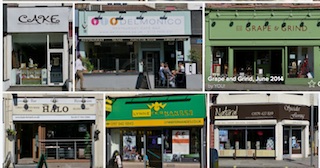 This is the big question about Bishopston set to be re-opened at The Bishopston Society's next public meeting, recently announced for Tuesday 17th April 2018, 7.30pm, at Gloucester Cricket Club.

It’s thirteen years since The Independent billed the Gloucester Road as “the last great British high street”. Now it’s time to look again at the vitality of our area in economic and community terms.

We’re lining up a talented panel of speakers and aim to get you, Bishopston Society members and other guests, to examine hopes and fears for Gloucester Road over (say) the next thirteen years.

We’ll focus on Bishopston and Gloucester Road from a local traders’ perspectives, look at trading history and trends, and share our hopes and fears for the future. We’ll celebrate all that’s so good about the combination of retailing and community spirit in our area, and look ahead to the warnings of decline that are evident. We’ll identify what we as local citizens can do to preserve and develop our area, in a positive and forward-looking, not nostalgic, way.

So, please commit this meeting, "The last great British High Street? - the future economy of Bishopston" on Tuesday 17th April 2018, 7.30pm, at Gloucester Cricket Club, to your diary, and stay tuned to this web site for further details nearer the time.

Meanwhile, to remind ourselves of some of the wonderful independent retailers on Gloucester Road, take a peek at our slide show, one of many from our extensive collection of photo albums on Flickr.