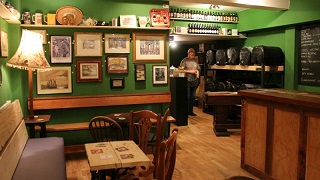 It is an extremely rare occurrence for the Bishopston Society to go so far as to actually support an increase in the number of alcohol outlets within the CIA Cumulative Impact Area on the Gloucester Road.  However, we have recently given support......

to a planning application at the top of the Gloucester Road for an unusual new drinking venue. No. 447 Gloucester Road has been converted very simply into a small-scale traditional micro-pub.  This is not to be confused with a micro –brewery where the beer is brewed on the premises.  In this case, the beer and cider are actually brewed locally in Ashley Down Road and the premises are so small that they will only accommodate up to 40 customers, with no space at the rear for a beer garden.  In fact the building is simply a shop which will not be upgraded in any way other than replacing the sign over the door.  Micro-pubs are rare in this part of the country with only 4 in the West and this will be the first in Bristol.  There will be no TV or gaming machines and customers are encouraged NOT to use their mobile phones.  So the only form of entertainment will be the dying art of conversation/story telling!

We gave this micro-pub application a lot of consideration, not least because TBS  has spent a huge amount of time and effort over the last few years trying to stem the constant pressure for more and more late night alcohol outlets on the Gloucester Road.  However, we saw this as a novel concept on a very small scale and hence a special case. So we felt on balance that planning permission should be granted, albeit with one or two conditions to prevent the pub expanding into adjacent properties or being sold on as a conventional drink outlet and recommended that opening hours be restricted to 9pm on weekdays and 10pm on the weekend, with opening on Rovers’ match days subject to a 6 monthly review.  Permission has been granted and the pub has just opened under the name of the Drapers Arms. More details here