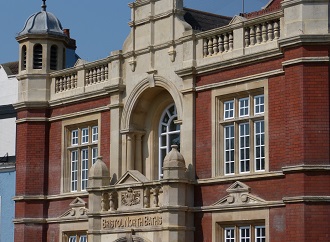 The Bishopston Society, frustrated as is everyone in the neighbourhood at the lack of any progress (for months now) on the Bristol North Baths and Library site, sent the following email on July 22nd to the Mayor, George Ferguson:

I am writing to you on behalf of the Bishopston Society to express our concern at the continuing delays with the work on the Bristol North Baths site, and the associated new library and flats. We did hear from Steve Matthews on the 30th May that it was anticipated that work on site should resume very shortly. However we are over 6 weeks down the line and it would appear that nothing so far is happening. Originally in January we heard that the work would resume within three weeks.

We have been told that the builders were required to stop work before making the building watertight and that, due to the wet weather, substantial weather damage has resulted.

We understand that although work on the Baths themselves was completed last year the occupants were and still are unable to move in until the new build work is complete – including the car park.

For residents of Bishopston this lack of progress is frustrating and disheartening. As yet we have no new surgery, no new library and no access to our well-used short-term car park.

Participants on the project appear to be blaming each other for the delays, which are already costly. If litigation should result, the council-tax payers of Bristol (which is all of us) may face having to pay the bill.

We in the Society would like to know who has overall responsibility for the project and the authority to resolve what appears to be an impasse.

We urge you to use your powers and initiative to re-start the development and bring about the long-promised improvements to this fine Victorian building and its surroundings.

We do hope that the situation will be resolved within days or weeks, not months or years, and not become a white elephant in Bishopston for some considerable time to come.

Secretary of the Bishopston Society

A reply from Steve Matthews, Project Leader of Property Services, BCC was received on July 22nd which stated:

Thank you. Admittedly progress has been slower than expected as regards resumption of works. Despite the apparent lack of action on site, the off – site progress has been significant. Capita is assisting the Council following its review of construction progress back in February and March in agreeing a schedule of remedial works to be carried out at the Developers expense. This, together with separate schedule of dilapidation works caused by weather exposure and a revised programme of works has (not unexpectedly) proved difficult to finalise. We are however expecting this to be agreed by Friday 25th July in anticipation of a hand  - back of the site to the Developer on 4th August. These dates are provisional. The initial extent of physical activity on site will largely depend on the speed with which the various trades contractors can be mobilised bearing in mind we are now entering school holiday period.

Assuming everything now progresses according to expectations we should be aiming to complete the project by the end of December 2014.