TBS has serious concerns with the Government's guidance on Permitted Development 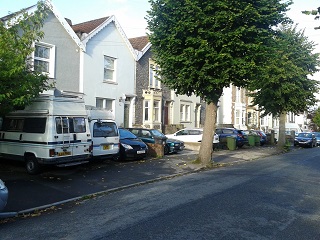 I am writing to express the Bishopston Society's concerns about the detrimental impact on the area of two aspects of Permitted Development, namely:

It is our view that overly lax planning guidance from the Department for Communities and Local Government (DCLG), with regard to Permitted Development, is creating uncertainty as to what is and what is not acceptable and in turn leading to building work being carried out without permission which is detrimental to the character of Bishopston and doubtless many similar residential areas across the country. From the visual point of view, roof extensions and parking in front gardens (along with upvc windows) currently represent the major threat to the character and integrity of traditional inner city residential areas like Bishopston.

DCLG planning guidance for extensions in general and roof extensions in particular is set out in 'Permitted Development Rights for Householders: Technical Guidance 2006'. This clearly states that, on the REAR elevation only, a roof dormer may be constructed under Permitted Development and without full planning permission so long as it complies with the following criteria:

- the maximum cubic capacity allowed can often exceed what the original house can reasonably accommodate without being overwhelmed visually (as is often the case with small 1930's detached houses). In many cases the roof extension looks like a small bungalow plonked on the roof of the house without any attempt to relate it to the existing shape of the house.
- the guidance stipulates that the cladding material should match the ROOF finish of the existing house, so that the dormer will blend into the roofscape, but as this is not followed and the dormers are often finished in bright white render to match the WALLS below, which is both visually highly intrusive as well as being extremely impractical to maintain over time.

However, the main weakness to this planning guidance is that no consideration at all is given to the case, which is extremely common in Bristol and the Bishopston area in particular, where the roof is at 90 degrees to the street, with a gable frontage. The clear implication of the guidance is that Permitted Development ONLY applies where the proposed dormer is at the REAR and is NOT visible from the street frontage. Yet, as this is not clearly defined, many gabled houses have recently been extended with ugly box dormers which come almost flush with the front wall of the house and are clearly visible from the street, with dire consequences for the appearance and character of the house itself but also the street as a whole. Unfortunately, an increasing number of the houses at the top of Egerton Road have been spoilt in this way. The problem is exacerbated by the fact that building work nowadays is generally carried out behind behind scaffolding wrapped with polythene. As such, when there is also no planning application, it is difficult to keep track of exactly what is being done until the work is complete. 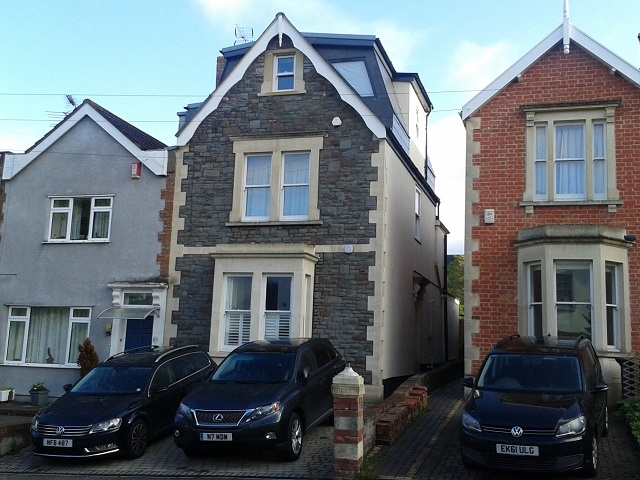 Work was well advanced on a huge double dormer, on both sides of the ridge, in a heavy black slate cladding, extending almost to the front wall of the house. The council stopped the work for several weeks and eventually the dormers were taken down at the front end and rebuilt approximately 1.1 metres back from the front wall. The end result is still extremely ugly and out of place, as per attached photograph, but at least it is set back from the front of the house so as not to be quite so visually obtrusive as it might otherwise have been. 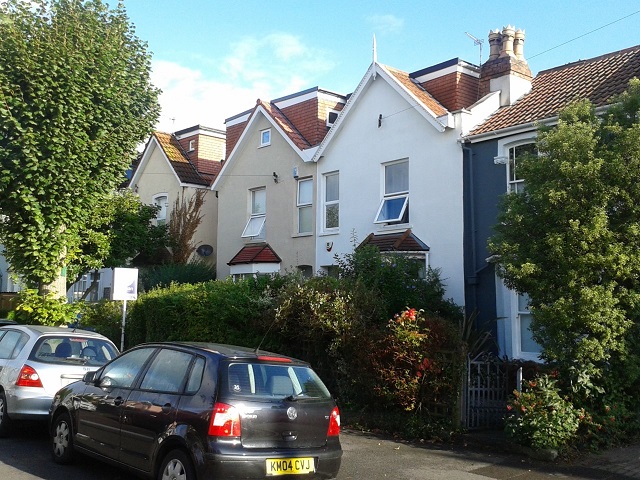 An application was submitted for a large single storey extension to the rear of the house. The drawings also referred in rough dotted outline to a roof extension which was to be carried out under Permitted Development and was NOT part of of the application. The Bishopston Society objected to the dormers, on the strength of the enforcement imposed on 95 Berkeley Road above, as they were shown extending through almost to the front of the property. Planning Enforcement took the case on and concluded that the proposals were in compliance with Permitted Development guidelines and thus acceptable. We consider that this judgement was not correct. The end result is clearly illustrated by the photograph above. 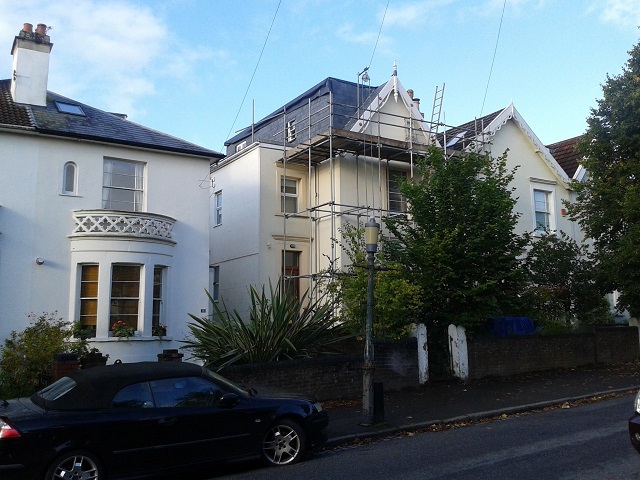 This property has had an extremely large, black slate clad and imposing box dormer constructed on its south roof slope. There are glazed french doors in the side of the dormer overlooking the dormer window of the neighbouring property. The proposals have not been reviewed in the light of normal planning regulations as, under assumed Permitted Development, there has never been a planning application. The dormer is extremely prominent and clearly visible from the street. (See photo above.)

In our view, these unwelcome roof extensions have slipped through the system as a direct result of the inadequacy of the Permitted Development guidelines and the inevitable lack of scrutiny when building is deemed not to require an application. The guidance should be rewritten to clarify what is acceptable in the case of houses with front gables onto the street.

- it destroys the front boundary enclosure and thus the sense of enclosure of the street and its architectural character
- it destroys the planting and the associated wildlife and microclimate within the street, all of which are essential elements in the fight against the effects of global warming
- it creates flooding by draining onto the highway and surcharging the sewers.
- it sterilises parking in the area as,even when the space/s are unused, other residents are not able/allowed to park in front, thus decreasing available on street parking in densely built up residential areas where parking is already under pressure.

We struggle to understand why parking in front gardens is allowed under Permitted Development with the only constraint being that the rainwater from the parking space should drain directly into the ground and not onto the highway; a requirement which was introduced in 2008 following severe flooding. Supplementary Planning Guidance 'Off-Street Parking in Conservation areas PAN 6' stipulates that, only in conservation areas where full planning permission is required, the front boundary and planting should be retained in part in order to maintain the character of the street. In areas which are not conservation areas there is no such protection and, particularly with narrow frontage houses, the space generally runs full width and leaves a gaping hole in the street. There are many examples in all of our towns and cities where the majority of houses have parking at the front and the street has become simply a scruffy car park. The top end of Berkeley Road is a local example (see photo at start of article) where almost every house has front garden parking, to the great detriment of the streetscene, and where as a result on-street parking is almost non-existent.

Our reason for writing to you as councillors is that we have been advised by the planning department that the only way of influencing national planning policy is by political pressure. So we are asking you to make our concerns known to the DCLG with a view to the rules on Permitted Development being reviewed so as to reduce the ongoing detrimental effect on Bishopston and other similar characterful and highly cherished period residential areas across the country. If this is not feasible, the alternative might be to extend the Bishopston Conservation Area to include the more characterful residential streets, like Egerton Road and Berkerley Road, so that the scope of Permitted Development is reduced and proposals of any significance are subject to the planning process.

We look forward to hearing from you.

The following reply has been received by Tom Brook:

Thank you for your impassioned and extensive email. Given you highlight that this requires lobbying of DCLG I have forwarded your statement to the BCC cabinet member for planning, to decide whether she wants BCC to make such a representation. I have also forwarded it to our MP to see if she likewise would wish to lobby DCLG.

Tom Brook
Labour Co-op Councillor for Bishopston and Ashley Down